The Open Stage on Thursday – honestly, it was a bit sad that there were so few participants. We, myself and Maarja, that is, thought we had advertised ourselves quite well. I wonder if people got scared of that simple topic, or maybe of us being a bit different physically ? Or is it still just about most people not knowing what psychodrama is... Anyway, there were no people besides our own company, although we had hoped so much that somebody would come. As far as we know, we were the only ones carrying through an Open Stage group in Tartu. 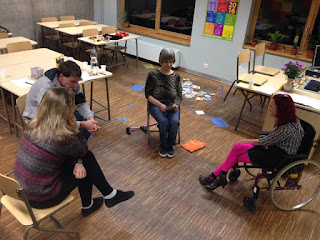 Actually, the theme of happiness is not such an easy one at all. We may well think – why, what's the big deal, either happiness is there or it isn't. Also, quite often people think that happiness is only about falling in love and loving. We discovered that that's not quite the case. Love is a wonderful and important feeling, at the same time love is a very wide concept and so is happiness. So, that's the short overview of what went on in the group. We can't talk openly here about everything what happened but if anybody got interested in our happiness theme and our group work, please invite us. We are ready to do the same thing 110 times, if need be. Believe me, every time there will be something new, something amended, something done better – but still, happiness will be the topic. We ourselves also keep gathering experiences and learning new things. And, exactly the same thing can't happen twice anyway. 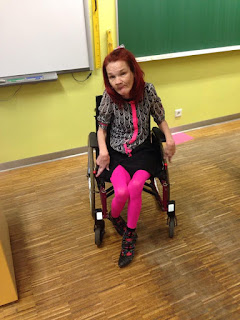 My traditional group leader's costume in pink and black :) 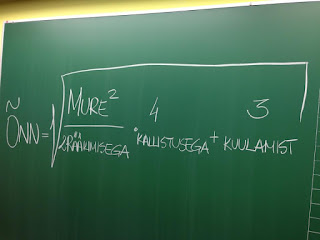 Our group took place in a math class, and we found the formula of happiness – although Maarja and myself had thought about it for days :) That's quite hard work. 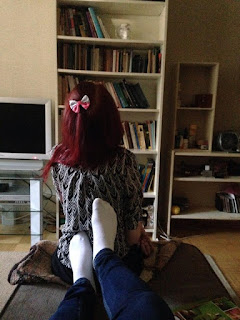 O wonder of wonders – I myself also had a happy day yesterday, I had two massage seances in one day – in the morning with Johanna, in the evening, before the Open Stage got started, with Kaari's legs. Actually, Kaari was taking picture of my princess bowknot.
Last week was quite busy otherwise as well – in addition to the Open Stage, I have given two lessons in the Catholic School. Last week I met the grades 5a and 5b. The kids were very nice. At the moment I don't know yet if more of such meetings are going to take place, but I hope so.
In the school I was asked a very good question that is not asked very frequently – maybe people just don't have guts to. About whether I had forgiven or was thankful to the midwives who had committed a grave mistake at my birth. I liked that the question was not about whether I was angry with them. Yes, I'm actually thankful to them that I survived, after all. I guess I am needed for some purpose exactly as I am. I really am NOT angry with them, and I can't say that I have been deprived of sooo many things in life. It must be my destiny to live my life as a somewhat different person – a destiny that had been determined before I was even born, for a purpose we don't know nor believe in. I was surprised that so young people asked such deep questions – this gives me hope that youth is not spoilt, nor will be anytime soon :)
Postitaja: tiia kell 12:51